It was wonderful to celebrate the culmination of another year at the Mt Coot-tha Auditorium,(24th Nov) after the many Functions that have been cancelled in the last two years. There were 93 Members from 28 Clubs in attendance. As it was the Biennial Awards there was a panel of three Judges:
Angela Trenerry from Touch Football Australia
Carwyn Arnold from the Probus Association of Queensland and
Des Boyland from the Wildlife Preservation Society who made the presentations.
They had a tough job sorting through the
many nominations.

A Special Guest was Ross McKinnon (pictured below) whose Contribution to the Development of the Mt Coot-tha Botanic Gardens was acknowledged by the present Curator Dale Arvidsson. 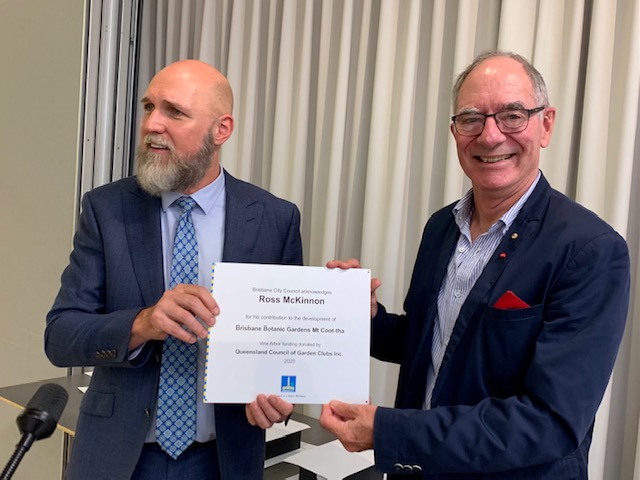 The Entry Door was manned by Committee Members Delwyn Hallett and Trish Mc Morrine surrounded by some of the many Raffle prizes. 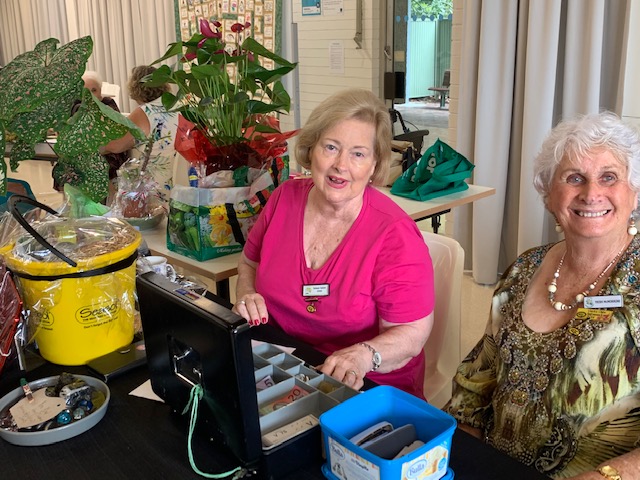 Other Happy Guests included Dell Underwood from Greenpark Garden Club and Heather Prior OAM  President of The Floral Art Society. 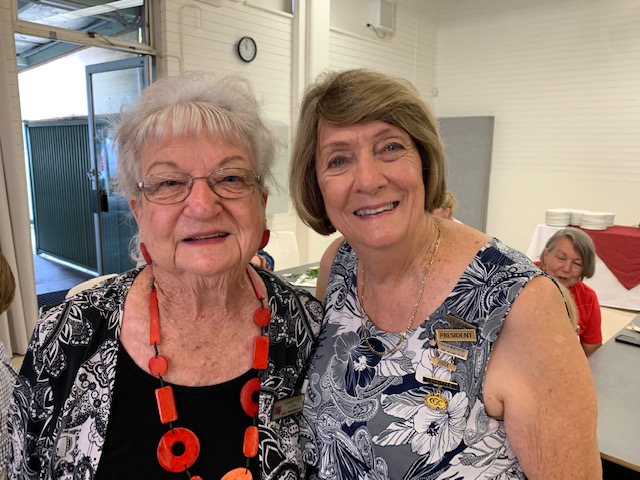 Most Contribution by an Individual to a Club.Awarded to Pam Nott from Mt Mee Garden Club and accepted by Tom Hayes Vice President of Q. C. G. C. 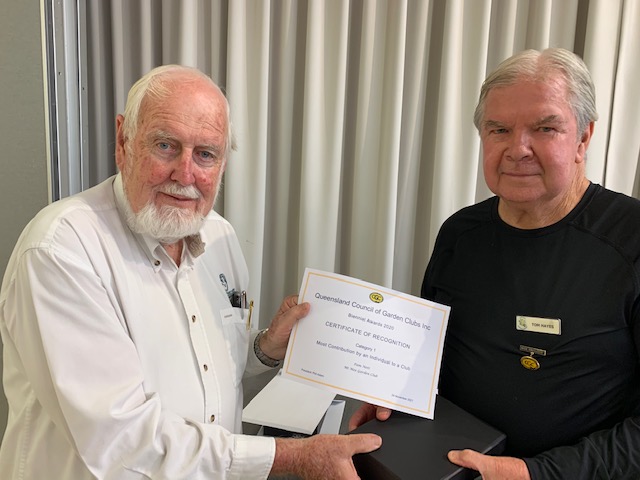 Most Contribution by an Individual to the Community, awarded to Denny Barry from the Mt Mee Garden Club and also accepted by Vice President of Q. C. G. C. Tom Hayes 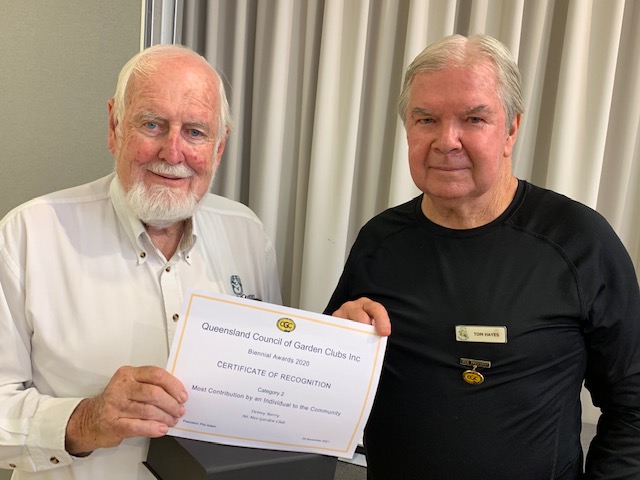 Most Contribution by a Club to the Community Won by Buderim Garden Club and accepted by President John Lyon. 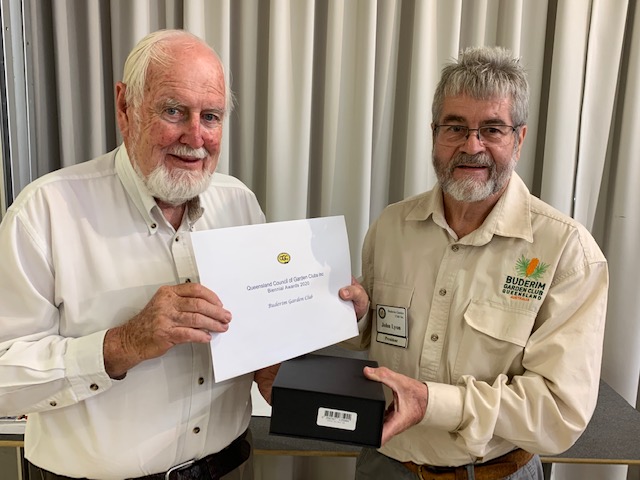 Most Contribution by an Individual to Horticulture.Won by Narelle Richter from The Gap Garden Club. 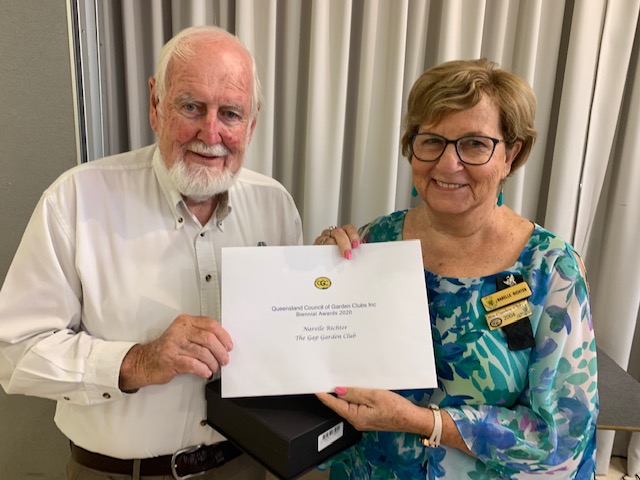 The food was absolutely scrumptious, and there were many positive comments about Cracklin  Pork Spit Roast including:  Dell Underwood, Nancy Weaver  and Jan Weis. 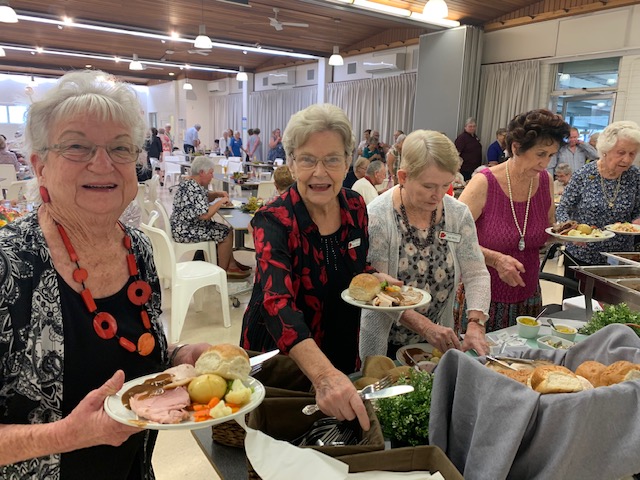 Raffle Prize Winner Barry Kable, from the Orchid Society with his beautiful Anthurium presented by Delwyn Hallett from Q. C. G. C. and donated by Peter Heaton from Heaton’s  Nursery who is a great supporter of Q. C. G. C. 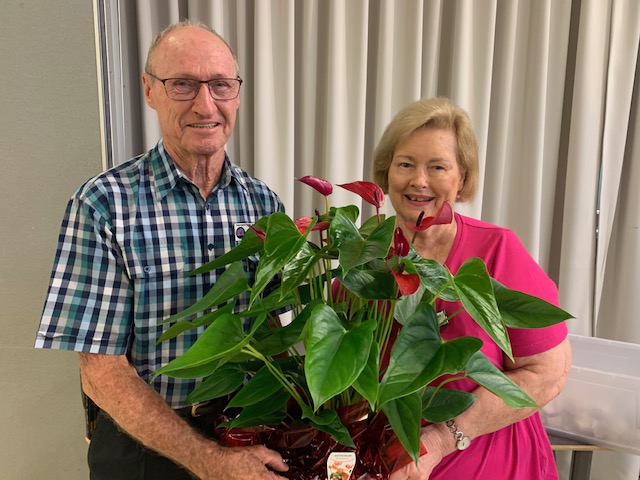 And Bronwyn Briant from Albany Creek Garden Club with a beautiful Anthurium. 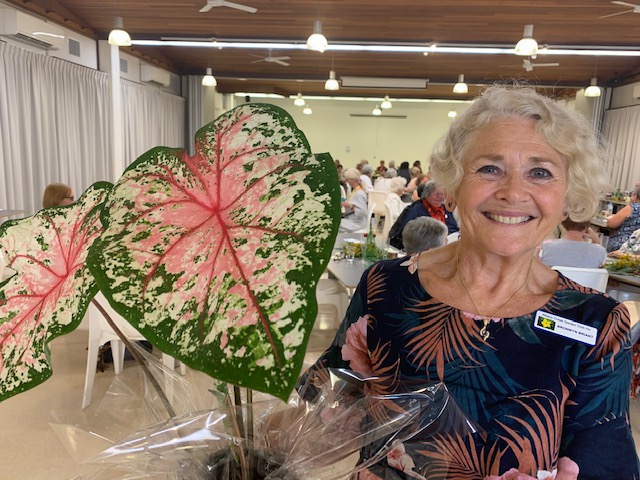 Enjoy the party.  Stories and photos by Elizabeth Parkinson